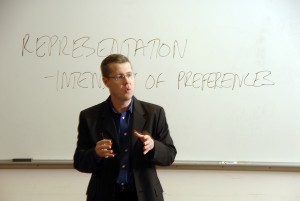 Political science professor Andrew Taylor leads a discussion about Congress during a class in Caldwell Hall.

Students interested in science, technology, engineering or mathematics may pursue the B.S. option. Students pursuing the B.A. degree can add a concentration in one of four subfields:

American Politics Concentration: American politics courses relate to the study of citizenship and representation, public opinion and political behavior, group dynamics, campaigns and pluralism, and political institutions and the policy process in the United States. The concentration develops skills that benefit students interested in graduate and professional education, law school, careers in political or administrative positions, and business careers that emphasize governmental relations.

Law & Justice Concentration: Study the interplay of law and politics in the United States, in the international community and in countries around the globe; study the judicial process, the role of lawyers and judges; understand constitutional law, international law and comparative systems of law and justice; analyze the legal and theoretical dimensions of political life. This concentration develops skills that benefits students interested in graduate education, law school and careers in law enforcement, justice administration, and various justice system agencies.

Public Policy Concentration: The coursework in this concentration examines values, institutions, and processes in the formulation, implementation and evaluation of public policy at international, national, state and local levels. Multi-disciplinary approaches and various techniques of policy analysis are employed.